As you can see it took It took us a while. We usually leave in mid-October right after the Hampton Snowbird Rendez-vous, but this year we had doctors' appointment after doctors' appointments. Then at the end of October, Ann had a surgical procedure and I had several injections to alleviate the pain in my legs. We ended up driving -- rather than boating -- down to the Rendez-vous and giving our presentations. This year both Ann and I gave presentations which both went very well.

We did not leave Solomons until 16 November and we have to be in West Palm Beach, FL by 15 December. It is easily doable, but we don’t have a lot of time to meander down the waterway and explore little towns and villages as we usually like to do.


Our first day on the water was almost perfect – a little cold, maybe, but otherwise just right. We left Solomons right on time at 0800, all the boat’s systems behaved as designed, the seas were fairly comfortable, and when we arrived, the anchorage at Fishing Bay was nearly empty and I was able to barbecue for the first time in several months. Barbecued ribs … Mmmm, Mmmm, Mmmm. All in all, it was almost a perfect day. Our second day, however, well, let’s just say it did not go quite so well.


That night the wind blew 15 – 20 knots as a “weak” cold front came through. That wasn’t so bad, but when we woke up that morning the wind was still blowing – not as hard as it had the night before, but hard enough to create two to three foot waves on the Bay. Now, 2-3 footers aren’t that bad and we have certainly handled much worse. However, these waves had a very short period and were on our beam for the first hour or so. The effect was to rock us from side to side. Ann and I were fine, if a little uncomfortable. Spot, however, couldn’t go to her favorite hidey-hole as we had used it for storage. Don't worry, she is looking for a new hideout.


Eventually, we turned south and the northerly winds were behind us, making for what are called “following seas,” and traveling was tolerable if not great. We refueled and moored at Top Rack Marina and decided to fix a few problems that we had noticed on the trip coming down. The first of these was the anchor chain which led to ... the GREAT CHAIN FIASCO.


The previous day – yes, the “almost perfect day” we had noticed that our anchor chain was all twisted and tangled. How exactly that happened I don’t know. Anyway, we decided that we should untwist and untangle the chain before we anchored again.  Well, one thing led to another and I accidently hit the "chain up" button on the windlass while my thumb was in the "untangle" mode. Yes, it hurt. A lot. No, I didn’t do any permanent damage. My thumb is black and blue and it is an even bet on whether or not I will lose my thumbnail, but I am still alive and kicking – with my thumb wrapped in a bandage.


That night, with my bad thumb and all, we decided to eat dinner at Amber Lantern, the restaurant associated with the marina. They used to allow free overnight docking to boats that ate in the restaurant. Too many people skipped out, however, and took the free dockage without eating the dinner. Now, they charge $35 per night, whether you eat dinner or not – still a pretty good deal.


The next two days can be summed up in one word: B-O-R-I-N-G.  Although the weather at the marina wasn’t bad, the winds and waves on the Ablemarle Sound were terrible. We decided we would stay in our slip for another couple of days. The problem is that there is absolutely nothing to do anywhere near the Top Rack Marina – nothing nada, zip – so we pretty much stayed on the boat for two days. As I said: B-O-R-I-N-G.


On the morning of 20 Nov, we were off … again. We timed the Great Bridge Lock and the subsequent bridges perfectly. The weather predictions were right and the Ablemarle Sound was as calm as we have seen in twelve crossings. Finally, life was good again! We spent the night at anchor in South Lake just off the Alligator River. Like an idiot I forgot to take a picture, but the water was mirror-calm and there were four sailboats silhouetted against a setting sun. It was really beautiful!


Now, here is one of the problems caused by the delay we suffered at Top Rack. We arrived at River Forest Marina in Belhaven, NC on Tuesday. We have stopped in Belhaven for three of the past the four years for one reason and one reason only – Spoon River Artworks and Café. I know it sounds like an art studio, but it is not. It is one of the best restaurants on the ICW; it competes with any of the good restaurants in DC. I could go on, but I won’t – because there was a problem; Spoon River is closed on Tuesday. I know, right? Well we actually knew that going in, but there was an up and coming restaurant that we wanted to try – the Tavern at Jack’s Neck. What we didn’t know was the BOTH of them are closed on Tuesdays. YIKES! Ok, so we were very disappointed, but the assistant marina manager told us that a place called “Fish Hooks” was open and had very good food – especially fried chicken. Now those of you who know me well, know that I LOVE fried chicken. So, disappointed as I was, we went to Fish Hooks. I was determined to have fried chicken.


They don’t serve fried chicken the evening, only for lunch. WHAT? What kind of a rinky-dink place was this that didn’t serve fried chicken for dinner? Distraught, I ordered some kind of honey-mustard chicken. It was terrible. So, we are going to think very hard about going to Belhaven the next time we cruise through -- especially if it is a Tuesday. Instead, we may have to try a bunch of different restaurants on the Waterway until we find a new favorite J.

For us, that’s about as traditional as it gets!


I am going to try and get this out tonight as the Redskins are looking just as bad as the Giants are (What would Thanksgiving be without football?) We leave early tomorrow to head for Mile Hammock Bay -- an anchorage near Camp Lejeune.
Posted by Mike and Ann at 9:45 PM 3 comments: 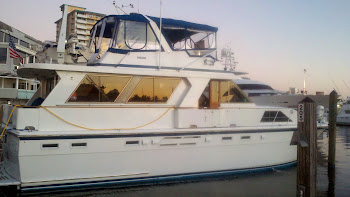 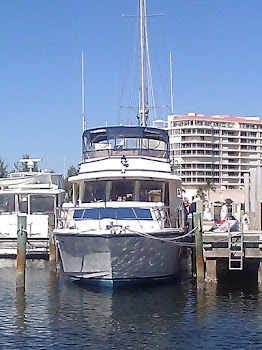